Home
Business
What Are the Benefits of Outdoor Advertising for My Business? 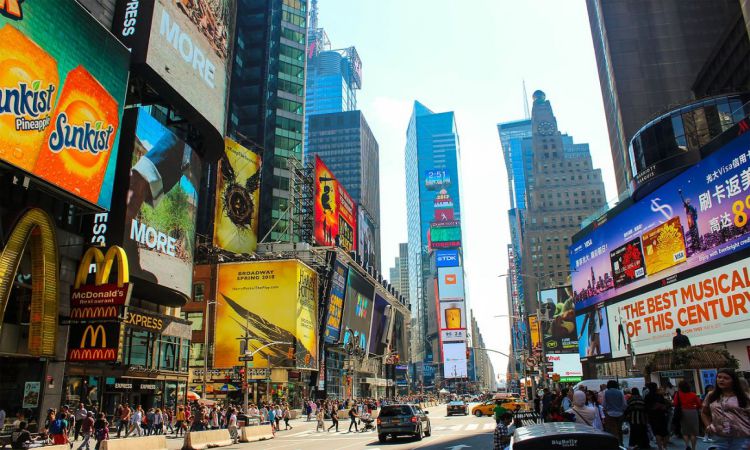 Did you know that 98% of any given population will see a billboard at least once a week? And, of that number, 71% will actually look at it long enough to read the message. Consider that outdoor advertising is often significantly cheaper than television advertising and it seems like a true recipe for success.

Despite this, people still see outdoor advertising as a thing of the past. They avoid it because it seems like it may be expensive and the return on investment is not worth the time and effort.

We’re here to tell you it absolutely is worth your time. Read more to find out why.

While you may think of traditional outdoor advertising as stale and static, there’s a lot of potentials to be had. In the modern age, people are eager for things that break the mold, and there’s a lot of room to play with interesting marketing techniques. Even a small business owner can step outside of convention and do something fun and memorable with outdoor marketing.

There are several types of outdoor advertising, and we’ll go into more detail about some of the most popular, but here are a few examples:

Let’s have a look now at what exactly some of this means and why it can be so useful.

One of the most recognizable mediums associated with out-of-home marketing (OOHM) is billboard marketing. This kind of advertising first saw a rise in popularity in the early nineteenth century. They have since remained a popular kind of marketing technique.

While the materials we use to make these adverts have changed and evolved, the core concept behind them has not. Massive, printed ads remain a cornerstone of the OOHM sector, purely for their visibility.

Billboards give marketers and advertisers a lot of versatility in their campaigns because they come in all different sizes and locations. We frequently find billboards along highways (on bridges or in separate stands) and near high-traffic places like:

This would be a checkout line or anywhere a customer goes to pay for their goods. The goal is to market a product to a customer as they’re ready to make another purchase.

Learn more about applying for point of sale advertising and take hold of your business ownership.

Retail advertising, another extremely popular (and profitable) type of OOHM, occurs in or around stores and malls. Improvements in printing technology have made it easier for marketers to create simple but effective displays, designed to leave an impact on the consumer.

These could be anything from floor graphics to different wall media.

While static advertisements like billboards can be an efficient approach to capitalize on a high-traffic region, the amount of individuals reached is limited to that spot.

Mobile advertising overcomes this by providing an on-the-go solution, typically via a printed vinyl wrap.

Some examples of vehicles you could use for your advertising are:

Outdoor advertising was always thought to be too expensive or unreachable for small businesses and single practitioners, but it is now more accessible than ever. Plus, there are so many diverse mediums that nearly any business of any size can profit from it. As the market gets increasingly flooded with what people perceive as “unwanted” digital advertising, promoting your brand outdoors can be helpful in a variety of ways.

Let’s dive into some of the major benefits.

One of the biggest advantages of outdoor advertising, especially transit advertising, is that even a single bus wrap ad can give total market coverage. This is because transit managers need to balance the number of route miles they travel each day.

Over the course of a month-long campaign, your ad will probably have been viewed in every single area of a transit system’s platform. This is not something you could easily achieve through flyers or even targeted social media ads, since your market is going to inherently be smaller.

Eyes on the Road

Unlike television or radio advertising, a viewer can’t simply change the channel to avoid the ad. Outdoor advertising takes advantage of this and it works really well since you have a captive audience.

When people are on the move, whether it’s morning commuters or pedestrian traffic in a densely crowded region, they’re more aware of their surroundings and pay attention to advertising in their field of vision.

The average customer must see something at least 7 times before they’re willing to take action, according to typical advertising conventions.

What this means is that companies should use a combination of media outlets to advertise their product. This could be anything from print, radio, or digital advertising, and you should supplement that with OOHM resources.

This means your target customer is exposed to it enough that they’re more likely to respond to your call to action.

Unlike television, print, or radio advertising, which broadcasts several ads in a row, outdoor advertising allows marketers to communicate with a captive audience with a single, distinct message. There’s no clutter to compete with, which makes the message stick clearer in the consumer’s mind.

A distinct advantage of outdoor advertisements is that your customers don’t have to do anything to see them. Unlike online or in-store ads, they don’t require your customer to enter a certain space to perceive them. They can be anywhere in their local landscape area, which eliminates some barriers marketers face when trying to get their ads out into the world.

Each type of outdoor advertising (transport, billboards, bus shelters, and so on) is distinct in that advertisers have the freedom to use the area in unconventional ways. These methods could (and should) be eye-catching and highly visible. Think of some of the more innovative types of marketing you’ve seen out there.

A great example is the “Lightbulb” billboard, for the Economist, which is a massive lightbulb that lights up when someone walks under it. This means any passersby become part of the message, which reinforces the ad even further. Your ads don’t need to stay confined in a box.

A Simple Strategy for Innovative Marketing

Outdoor advertising may seem like a thing of the past, but we’re only just seeing the scope of the possibility of what marketers can achieve. All it takes is a little creativity, imagination, and working with the right agency to see your ideas come to life.

You’re limited only to what you can dream, so dream big and aim for the stars. With the right billboard, that may even seem like a possibility!

If you enjoyed this article, be sure to check out the rest of our Service and Business category.