The scientific name for Guppies is Poecilia reticulate and famously known as rainbow fish and millionfish. It is a well-known freshwater aquarium fish species and popularly distributed tropical fish the world over. Guppies give birth to a fry or guppy baby.

Guppies reproduce at a very high level. Once every month, they produce up to 200 fries. To prevent the overflow of guppy fry, you can use other fishes to eat the babies. 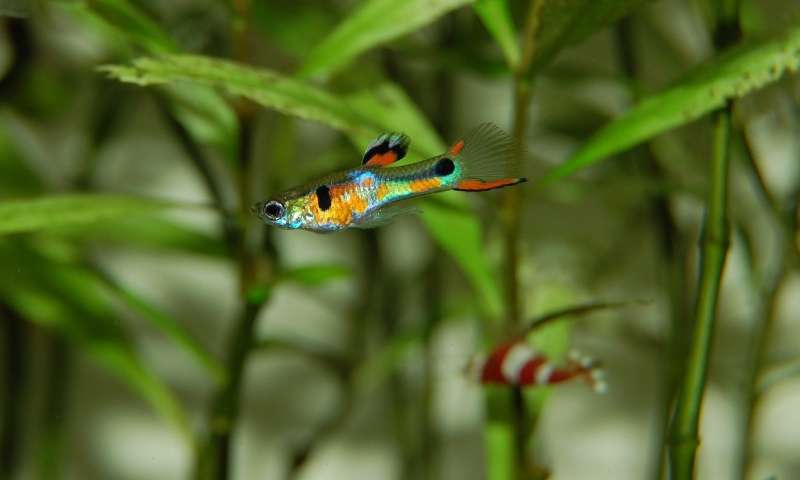 Angelfish have a beautiful appearance that thrives well in a freshwater tank. This species of fish is well-known for its vibrant-colored body and attractive fins.

Angelfishes are usually peaceful and friendly in a community tank. They also hold the title as the king of the aquarium.

They get territorial and retaliate when threatened. Keeping Angelfishes with guppies will not be a problem because both species are friendly.

In terms of population control, the angelfish are efficient in eating up the guppy fry once the Guppy spawns, according to Aquariumfish City.

Male gouramis can be territorial and aggressive towards each other. They are large and moves very slowly.

However, they are cool-headed towards other species of fish. They usually have their fins nipped on by other smaller fishes but not from guppies.

The gouramis are an excellent option to control the population of guppies because they love to eat. Gouramis are also large, so it allows them to eat massive amounts at one go. At the rate at which a guppy reproduces, Gouramis can gobble almost half in one go.

The Betta fish species are well-known for their aggression and territorial tendencies. You can use a large tank to accommodate the guppies and the betta fishes. The betta fishes are usually calm towards guppies, but they will eat their babies.

The betta fish is another excellent choice for guppy baby population control. Even if your betta fish were in a separate tank, you could transfer them into the guppy tank. For the betta fish, it does not make much difference because they will start munching on the fry immediately.

It is also advantageous for you because you do not need to feed the betta for some period. It would have been full from eating all the fry.

As a territorial and aggressive species, the Dwarf Pufferfish is not the best candidate for dwelling in a community tank.

Experts recommend keeping them with other equally aggressive fishes like the Paral fish and Filament Barbs. They can also dwell with smaller fishes that swim faster like Guppies, Rasboras, Danios, Tetras, etc.

These fishes are aggressive and greedy, taking a lot to satiate their hunger. They do not waste time when it comes to eating, especially Guppy babies.

Many consider the Pufferfish to the ideal choice for controlling the population of baby Guppy. Their athletic hunter skills and ability to consume vast amounts of fry are reasons to keep them at no.1.

People find Swordtail fascinating because of their unique appearance. The mass attraction is due to their long tail fin.

They are a peaceful species that gets along well in community tanks. However, it does not stop them from consuming the Guppy baby. It is, of course, the right candidate for guppy baby population control.

It is, therefore, not that hard to keep the population of Guppies under control. With a better understanding of each fish species, you can choose an appropriate one for your guppy tank.