To become a fully licensed journeyman electrician, it takes about 4 years.

During an apprenticeship, electricians undergo rigorous training to ensure they can perform electrical work safely and effectively. Without that depth of training, DIY electric work can be dangerous.

If you’re considering DIY electrical projects around the house, you should understand the potential safety hazards. But before that, you should know whether or not you’re even permitted to do so. 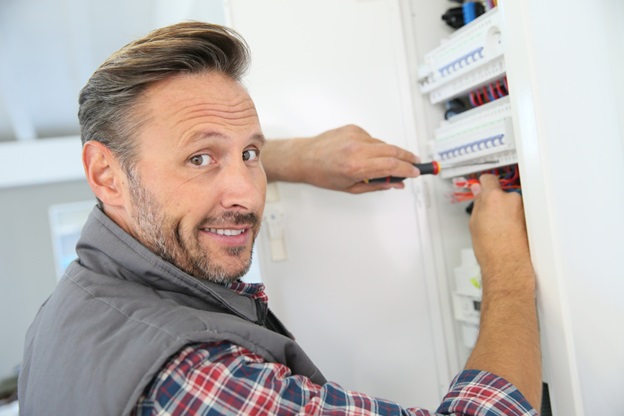 Don’t take out your toolbox until you know the answer to both those questions.

In many places around the US, DIY electric work is permitted. That is, as long as you are the owner-occupant of the home in which you’re doing the work.

In some places, DIY electric projects require a temporary license. These rules vary from state to state and between municipalities. It’s important you contact your local regulating body before performing any work yourself.

Electrical work is dangerous work, which is why electricians require extensive training. When you perform your own electrical work, you run the risk of the following:

For these reasons, we highly suggest calling a residential electrician to do electrical work in your home.

If you do decide to take on DIY electrical projects in your home, then you should have it inspected immediately after completion. Indeed, some permits will require that your work be inspected in order for it to be approved. The inspector will look for code violations and approve your electrical system if it’s been done correctly.

Inspectors look at everything from how neat the DIY electrical wiring is to how you’ve wired switches. They’ll also check junction boxes and your main electrical panel. If your work isn’t up to code, you’ll have to go through the process until it’s correct and meets safety standards.

Home Improvements You Can DIY

Electrical work requires the knowledge and expertise of a professional electrician. That’s because DIY electric work can be dangerous. And beyond the potential for danger, electrical work often requires permits and inspections that can be difficult to pass if you’re not 100% sure of what you’re doing.

But for home improvements that are within your grasp, we have all the advice and tips you need. Be sure to check out or Tools & Home Improvement section for more.