Home
Tips and Tricks
How Much Solar Power Is Produced in the U.S.? 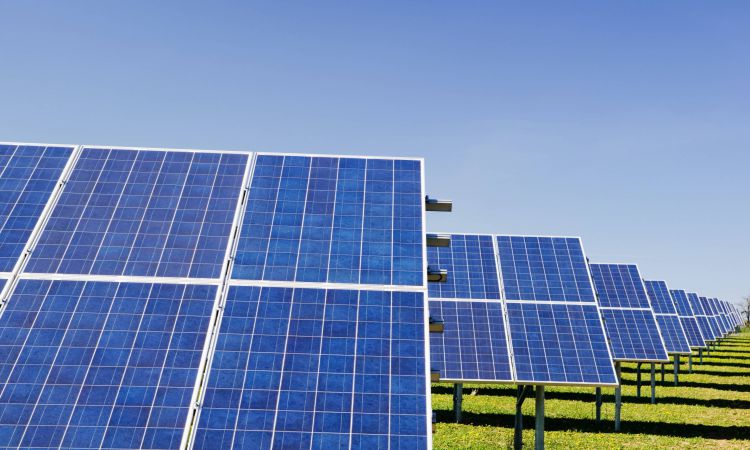 Every year, there is about 4.12 trillion kWh of electricity generated throughout the U.S. The bulk of this electricity is produced through the usage of fossil fuels like natural gas, coal, and petroleum.

But it’s worth noting that there is more and more solar power produced throughout the country each year. Lots of home and business owners have started to embrace the power of solar energy by installing solar panels on their roofs—and it has paid off in a big way.

So, how much solar power is produced in the U.S.? We’re going to set out to answer that question today. We’re also going to touch on how you can help to increase the amount of solar energy produced on an annual basis.

Learn more about solar power by checking out our solar energy guide below.

How Much Solar Power Is Produced in the U.S.?

In a few moments, we’re going to talk at length about solar power production in this country and what you can do to help increase it. But to start, let’s answer the question, “How much solar power is produced in the U.S.?”

The total amount of solar energy produced in this country varies from one year to the next. But as of 2021, the U.S. produces about 115 billion kWh of electricity through the usage of solar.

That might seem like a lot of solar power. But in reality, this only represents about 3% of all the electricity produced each year. So, there is definitely room for improvement—and it sure looks like the country is ready to rise to the challenge based on the increased popularity of solar panels.

How Is Solar Power Produced in the U.S.?

Now that you know how much solar power the U.S. produces every year, it’s time to discuss how it’s actually manufactured. There are a couple of methods utilized in this country to collect sunlight and convert it into solar energy.

First and foremost, those throughout the country have started to use photovoltaic solar panels to create solar panels. In some cases, these solar panels will be strategically positioned on top of homes. In others, there will be rows and rows (and rows!) of solar panels on so-called solar farms.

However, there are also solar facilities out there that specialize in creating solar power in another way. These facilities use mirrors to concentrate the solar radiation found in sunlight so that they can produce solar power and send it out into the world.

The solar industry is almost always on the hunt for new ways to produce solar energy, too. So, it wouldn’t be surprising at all to see new methods of solar production pop up in the coming years.

Where Is Most Solar Power Produced in the U.S.?

Solar power is produced in pretty much every state throughout the entire country. But there are some states that are currently collecting more solar energy than others.

Take a state like California, for example. It is, by far, the biggest solar power producer in the U.S. at the moment. It’s why California is able to say that about 17% of its electricity comes from solar energy.

California isn’t the only state making a big splash in the solar industry, though. There are also many other states doing the same thing. Here are some other states that are following its lead:

If you happen to live in any of these states and you aren’t helping to produce solar power yet, it might be time to change that. You could be missing out on a big opportunity to embrace solar energy.

How Can You Help the U.S. Produce More Solar Power?

Would you like to help the country to produce even more solar power than it already does? If so, there are a number of things you can do to help.

To start, you can look into gathering more solar info so that you’re able to learn the ins and outs of solar energy. It’ll be difficult for you to do anything to help make a push to produce more solar power if you don’t know the answer to the question, “What is solar energy?”

From there, you can also begin to look into the possibility of having solar panels installed on the roof of your home. Your house may or may not be a good candidate for solar panels depending on where it’s located and which way it faces.

Outside of doing these things, you can also vote for any initiatives in your city or state designed to help produce more solar power. It could help your city or state to land at the top of the list of the biggest solar producers.

How Much Solar Power Can You Help to Produce for the U.S.?

In the grand scheme of things, you probably aren’t going to be able to produce a whole lot of solar power on your own. The average solar panels will produce somewhere in the neighborhood of 1.4 kWh to 1.9 kWh of electricity per day.

That might not seem like very much. But over time, all of this electricity produced by solar energy will add up!

The fact that you put solar panels on your home’s roof might also motivate some of your family members, friends, neighbors, etc. to follow your lead. Collectively, you can then work together to produce more solar power than you may have imagined you would be able to.

There are still very few people in this country who have solar panels installed on their roofs. You can work to change that by installing solar panels yourself and pushing those around you to do the same.

What Will It Cost for You to Start Producing Solar Power?

Most people like the idea of trying to generate solar power with solar panels on their roofs. But what they don’t always like is the idea of paying for them.

Solar panels are going to require you to make a relatively large investment. It’s not out of the ordinary for people to spend tens of thousands of dollars on solar panels.

But one thing that we would like to point out is that the price of solar panels has gone down substantially in recent years. And it looks like the cost of solar panels is going to continue to go down over time.

Because of this, you should be able to put yourself in a position to buy and install solar panels on your roof sooner rather than later. Solar panel installation isn’t the pipe dream that it used to be for many Americans.

What Are the Benefits of Producing Solar Power?

If you’re able to afford solar panels for your home’s roof, you’ll love them from the first second that they’re put into place. Solar panels are going to provide you with a whole host of benefits.

Check out some of the biggest benefits of having solar panels installed:

But the best benefit of all might be that installing solar panels on your roof will allow you to contribute to this country’s solar production. It won’t be long at all before you’re seeing the national solar production tick up thanks in part to your contributions.

For all of these reasons, you should strongly consider installing solar panels on your roof. You will wonder why you didn’t decide to do it a whole lot sooner once you see how beneficial solar power can be for homeowners.

Figure Out How to Start Producing Solar Power for Your Home

You could argue that the real answer to the question, “How much solar power is produced in the U.S.?”, is “Not enough!” Because while the country does produce its fair share of solar energy, the amount of solar power produced could be higher.

You should find out how to start producing more solar power on your own. It’ll help play a part in this country’s solar production and push the country in the right direction when it comes to its reliance on solar energy.

Get more solar energy tips and tricks by reading through more of our blog articles.