Home
Miscellaneous
Japanese Culture: The History of the Kimono

The kimono is an iconic object in Japanese culture. But, when were kimonos first invented? And when did they become so popular?

Luckily, there’s tons of interesting information about kimonos out there for you to explore. Read on to learn about the history of the kimono. 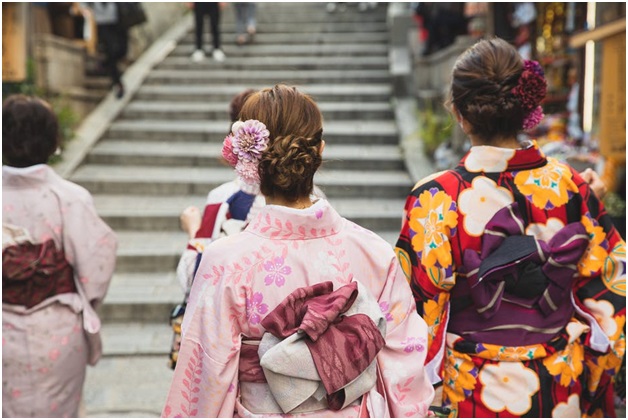 The Origin of the Kimono

There are several predecessors to a kimono that existed previously. The most similar early garment to the kimono were types of hanfu – traditional Chinese clothing that had influenced Japanese culture.

The first version of a Japanese garment that resembled a kimono first came into being way back in the Heian period, which ended in 1192. This happened because immigration and commerce between Japan and China had petered out for political reasons.

The next version, called a kosode, was an article of unisex clothing created in the Edo period. This piece of clothing had smaller armholes. These were usually adapted as a cultural marker and could used as a great staple by every type of Japanese person.

The kimono itself was not invented until the 1800s, during the Meiji period. Today, the kimono has a place of distinction as the official national dress of Japan.

Today, different types of kimonos can be a part of the normal wardrobe for different people on different occasions.  While the role of kimonos is usually formal, some versions can also be worn daily.

Different types of kimonos may have sleeves of different lengths, padded hemlines, different fabrics, more elaborate patterns or designs, or other possible differences.

Homongi kimonos are usually worn by the bridal party at weddings. Komon are casual kimonos that can be worn on an everyday basis. These kimonos tend to be on the shorter side, and they usually don’t have crests or other insignia. Another form of the komon is the edo komon, a kimono printed with a small, repeating pattern.

Mofuku are kimonos that you can wear when you’re in mourning, such as when you’re attending a funeral. Furisode kimonos are usually only worn by unmarried women and are a type of Japanese clothing only worn on formal occasions.

An ironmuji, a silk kimono, is usually worn by women and traditionally reserved for wearing at tea ceremonies. These kimonos are usually unprinted and are instead one solid color.

Tsukesage kimonos are semi-formal kimonos, which are appropriate for occasions such as birthday parties. Uchikake kimonos are worn by women who are getting married or occasionally by people performing in a play. Shiromuku are also wedding attire and are almost always made of white or off-white material.

Throughout its history, kimonos have been worn in different ways. Early iterations of the kimono were often worn with aprons or long skirts. They have always come in a wide variety of colors, often based on political affiliations or family connections.

Some kimono designs are reserved for specific seasons. And, some patterns are perceived as more formal, some less formal.

Others aren’t meant to be worn during specific times. For example, kimonos with cherry blossom motifs should be avoided during cherry blossom season since that would take away from the beauty of the blossoms.

Kimonos made of different materials are worn in different seasons and for various reasons. They’re commonly made of the following fabrics: ro, habutai, crepe, chirimen, sumugi, rinzu, and shushu.

Kimonos fell out of use when the Japanese government encouraged Western fashions in the early 1900s, but they have since become more popular again. That’s partly because people in Western countries began to get interested in Japanese culture, giving Japanese fashion more widespread and mainstream appeal.

They can be worn with lots of different types of clothing, either Japanese or Western. Handcrafted sneakers, for example, are a great type of shoes to pair a kimono with. The way you wear your kimono can also affect how formal it is. Try experimenting with different looks to figure out what works for you.

A vital part of wearing a kimono is considering the layering you want to use in your outfit. The kimono is usually the top layer when you’re composing your outfit. Since the kimono material is typically delicate, it’s essential to wear something under it to protect the material from your skin.

But, correctly layering the kimono will help you show off your kimono in the best possible light. For example, if you choose a casual kimono, a t-shirt and jeans can go amazingly with a patterned kimono. You can then pair it with sneakers, boots, heels, or whatever pair of shoes you find most interesting.

If you’re trying to wear a kimono for a more formal occasion, you’ll want to pay a lot of attention to the rules of wearing a kimono. Some kimonos may have more specific guidelines for wearing them properly, and you always want to make sure that you’re respecting Japanese culture and rules when you’re wearing a kimono. That’s why you need to do your research before you choose to try and wear a kimono for a formal or serious occasion.

History of the Kimono: Now You Know

Clearly, the history of the kimono is rich and interesting. So, if you’re thinking about starting to wear a kimono, do your research and figure out what types of kimonos suit your style needs.

Are you interested in learning more about culture, fashion, and more? Take a look at some of our other posts today.